If you google the name Denise McCluggage, there are 2 things you will see in every picture of her – her polka dot helmet and her wide smile. With them come incredible memories you can practically feel becoming a part of the longer you look at the pictures of this incredible woman. It’s obvious that the loved what she did and the people she did it with – the titans of the Golden Age of 1960s motorsport. She competed against men as their equal and instilled in them a trust of her so that she would be sure to have the best story at the end of the weekend. In an era when women were often pushed off to the side, Ms. McCluggage stood against the status quo and made her name known. 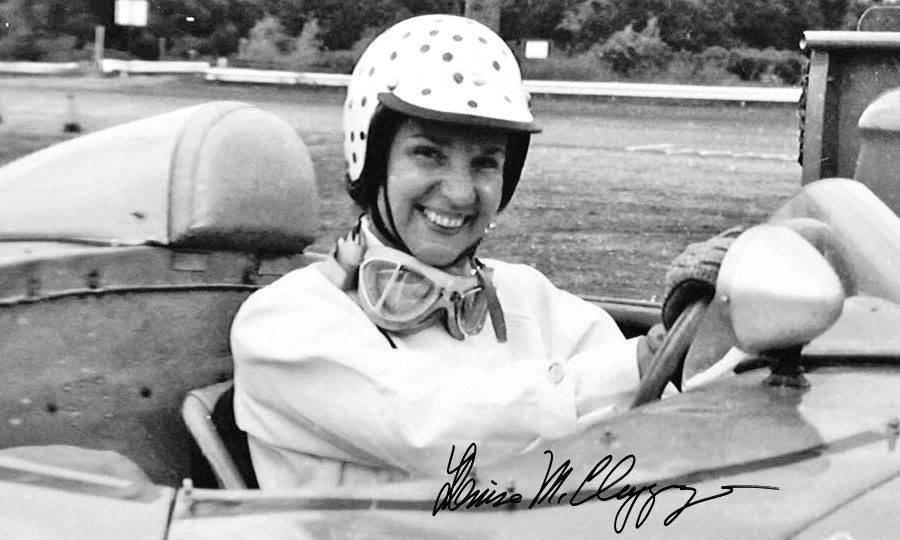 Denise McCluggage was born January 20th, 1927 in El Dorado, Kansas, USA where she spent her childhood. At 6 years old, she spotted a Baby Austin 7 parked on the street of her hometown; immediately falling in love with the small car, she asked Santa Claus to bring her one for Christmas.

Ms. McCluggage got her first driver’s license at age 14, at the dawn of WW2. With luxuries like car racing taking a backseat the production of wartime goods, McCluggage attended Mills College in Oakland, California studying philosophy and political economics and kicked off a career in photojournalism at the San Francisco Chronicle.

It was while covering a yacht race in the early 1950s that McCluggage met Briggs Cunningham, the man responsible for building the first American cars to race at Le Mans. Needless to say, she couldn’t resist the call and soon was covering the post-war races around the country. One could say that wartime had a positive effect on American car racing, since the soldiers with a passion for speed and adrenaline that had been fighting overseas came back with a newly found love of European car brands and the way of racing that was so much more dynamic than the one in the US. Consequently, the big European figures like Juan Manuel Fangio, Stirling Moss, Jo Bonnier, and others were crossing intercontinental borders to see what overseas had to offer.

It was at this very exciting times in the motorsport that she fell in love with it. While still living in California, she bought an MG TC Midget, her very first sports car, and got behind the wheel herself. She started competing at local club events, small little things so different from the races she was seeing at tracks like Watkins Glen and Sebring. But it was the perfect place to begin honing her skills behind the wheel. 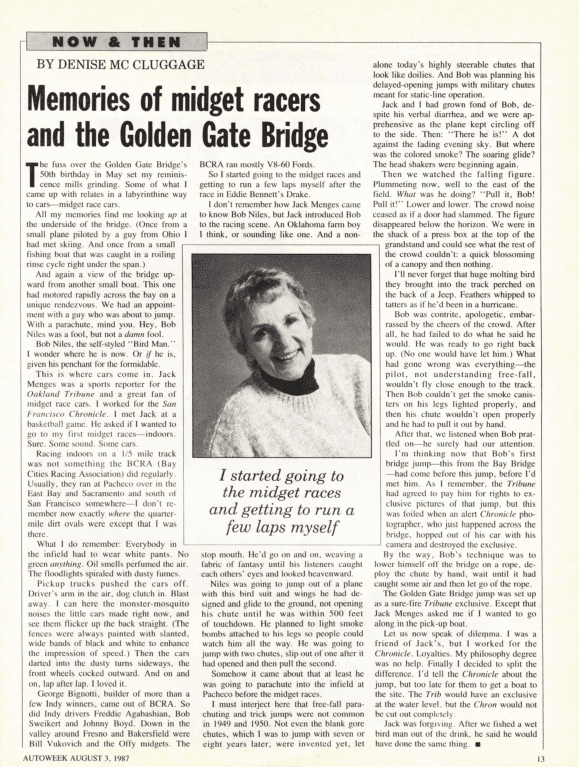 Moreover, this way also where Ms. McCluggage started practicing a new form of writing: participatory sports journalism. She fully believed that she could cover races more effectively if she was an entrant instead of just a spectator as it gave her the opportunity to understand the racer’s mindset and feel out their lines on the track. And she would actually be allowed in the paddock – something that most female journalists were barred from at the time.
She got her big break in 1954 when she packed her bags and moved to the Big Apple to work for the New York Herald Tribune as a sports journalist. She left behind her MG and upgraded to a Jaguar XK140 – a car better fit to start off a professional racing career.

Denise McCluggage was the first woman to win a feature sportscar race at Thompson Raceway in Connecticut in 1959. Behind the wheel of a Porsche RS, she commanded the field and even went on to compete – and place a stunning fifth place – in the United States Grand Prix at Watkins Glen the following year. Ms. McCluggage welcomed the 1960s by winning the GT Class at the 12 Hours of Sebring behind the wheel of a Ferrari.

Before long, she was being invited to races all over the world. She teamed up with the Ford factory team to drive a Falcon and win the prestigious 1964 Monte Carlo Rally. You could find her name on the list of entrants at tracks like Daytona, the Nürburgring, and Elkhart Lake. She was doing it backed by big-name marques such as Porsche and Maserati. And she was competing against the likes of Stirling Moss, Phil Hill and Carroll Shelby.

And, all the while, McCluggage was splitting her focus. She might be competing against some of the world’s best talents, but she was a journalist at heart. Her presence at the track meant that she was privy to the pre-race rituals, anxieties, fears, celebrations and dramas that take place away from the public eye. She’d take track walks with Phil Hill as he daubed paint on the apexes he was worried he’d might miss. She chatted with Fangio and Moss on their dominant treks through Europe. She was just one of the guys.

Women weren’t always welcome to participate in the same big events as the men, but they’d be relegated to the “Ladies Races” that ran as support features for the main show. She would be forced to interview drivers through chain link fences at Indianapolis because women were strictly forbidden from the garage, pits and press boxes. She was nominated to compete in Le Mans by Luigi Chinetti, only for the FIA to reject her presence because they “didn’t choose to invite women”. That’s why it was an amazing accomplishment – carving out a place in the racing world. She pulled on her helmet and won races. She found other ways to grab an interview: chatting to a driver in a hotel lobby, a quick side conversation at a dinner. She made sure her racing was impeccable and her stories were unlike anything anyone had ever heard before. Denise McCluggage’s name echoed through the racing world, refusing to be ignored. 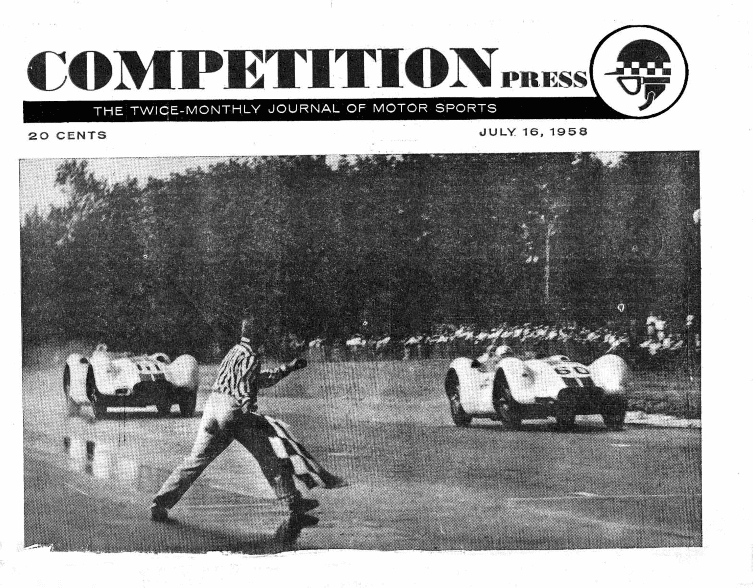 Denise McCluggage’s list of acknowledgments and awards is incredibly long. She was one of the big factors behind the launch of AutoWeek, then called Competition Press. She held the Ken W. Purdy Award for Excellence in Automotive Journalism and the Dean Batchelor Lifetime Achievement Award. She’s the only journalist to have been inducted in the Automotive Hall of Fame. She wrote a weekly syndicated column, “Drive, She Said”, which appeared in 90 newspapers throughout the US and Canada. And she still found time to write books.

Ms. McCluggage died May 6, 2015, at the age of 88, but her legacy is still prevalent to this day. It is in part due to her tenacity that female journalists started being admitted to previously off-limit areas and female drivers began to be more well-respected. She didn’t set out to change the scope of what being a woman the automotive industry and racing entailed, but she loved what she did and made sure that she was going to get her access.

We here at CRS Automotive salute you. 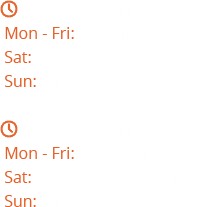